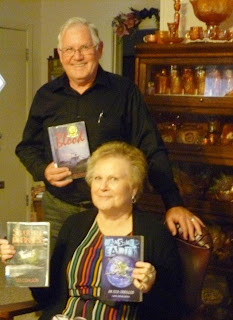 For the past two weeks we've been shuffling between Helotes-Austin-Bertrum-Sealy-Katy-Edna-Gonzales helping one daughter move, attending a wedding, celebrating Thanksgiving a week early with the entire family, and visiting with the Eleanor Brackenridge Literary Club. I began my writing career as a high school senior covering football games for The Edna Herald (now the Jackson County Herald-Tribune) in 1965 and was asked to talk about my journey as a writer, and to sign copies of Ransomed Earth.

This Literary Club was formed in September 1901 and named after Mary Elanor Brackenridge in 1903. Eleanor moved to Jackson County, Texas, in 1855 from Indiana and remained there until 1866 when she moved with her mother to San Antonio after her father died. A graduate of Anderson Female Seminary (New Albany), Eleanor was very active in numerous women's clubs (including the founding of the Woman's Club of San Antonio), in the DAR, and in her church. She helped form Texas Women's University and served on the Board of Regents for over 20 years. She was active in establishing and defending women's rights, publishing a pamphlet entitled The Legal Status of Texas Women in 1911. In 1918 she became the first woman to register to vote in Bexar County (Texas) and was one of the first women in the nation to serve as a bank director. Eleanor gifted the new literary club in Edna with $100 that became the foundation of the E.B.Literary Club's Scholarship Fund, which the club maintains to this day in helping students further their education. The San Antonio Express called her "in many respects the foremost woman citizen of Texas" upon her death in 1924. (Information taken from the Eleanor Brackenridge Literary Club archives and the Texas Handbook on Line.)

I thoroughly enjoyed meeting the dozen or so ladies who attended the November 14th meeting, including my aunt Jean Powers who came as a guest, and Jessie Mae Moody who graduated from Edna High School with my mother in 1939. I was particularly impressed that the meeting began by reading "The American's Creed" by William Tyler Page. I had not heard these words in many, many years even though they are among the most important documents in our nation's history. Page's creed was accepted by the United States House of Representatives on April 3, 1918 as the official creed of all Americans. The ending of the creed...."it is my duty to my country to love it, to support its Constitution, to obey its laws, to respect its flag, and to defend it against all enemies."...was especially meaningful to me after the recent national election, and upon reflection of the actions by some American citizens over the years to burn our flag as a means of free expression. Opening the meeting with such an important reading is reflective of the patriotism and gentility reflected in this 110 year old organization. It would behoove more organizations to begin their meetings with the reading of the American's Creed.

Many thanks to Diann Walleck (vice president and hostess) for her invitation to speak, to Becky Hanys for such a superb reading of the American's Creed, to Helen Long, club president, and to all the members of the Eleanor Brackenridge Literary Club for their hospitality, and for all they do to promote literature, scholarship, and civic duty.