My wife and I recently returned for a long-planned family vacation to the island of Hawaii. We saw many of the natural sites for which the largest island in the Hawaiian chain is noted – volcanoes, beaches, clear blue waters and inland water falls, and most notably, a tropical botanical garden with multiple plant species too numerous to count. 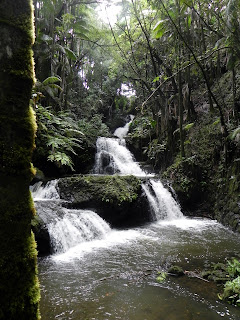 Imagine the excitement upon my return to receive an email from the Eleanor Brackenridge Literary Club of Edna notifying me that the club was recognized at the 116th Annual Spring Convention of the General Federation of Women’s Clubs (Texas) for receiving two District Awards in different categories.  A portion of the nomination paperwork included a report of my visit on November 14, 2012, and was used to support the category award for Environment/Conservation and Education/Environment. It reads in part:


Ralph Waldo Emerson once said that “Talent alone cannot make a writer. There must be a man behind the book.” That man in this case, Lester Coalson, has a goal of his writing to include information that promotes the saving of our environment. From choosing settings to describe whose very existence means man must become involved for them to survive, to including characters who, although involved in a mystery, strive greatly toward preserving our natural resources. Mr. Coalson’s writing gripped the imaginations of the twelve members attending both as a local boy turned writer and as a man with a worthy purpose.
Additionally, his presentation featured a step-by-step guide through the rigors of obtaining a public forum for his work.  How writers become published is very challenging indeed as explained by Lester Coalson. His books are now available as “e-books” as well, and this innovative literary aspect of publishing was very educational for the Eleanor Brackenridge Literary Club.
Mr. Coalson’s literary theme of saving the environment for the future brings to mind the words of the Federation Song: “Why stand we here today? Why but to make the way for hope’s glad feet. Bidding the world aspire to purer aims….”


The  Texas Federation of Women’s Clubs (which is a member of the General Federation of Women’s Clubs) was established in 1897 and has provided a way for women to get together and go about the business of women; bettering themselves, their families, their communities, and the world.
The Federation website has a compelling history of the Women’s Clubs movement, boasting that 85 percent of public libraries in Texas were founded by women’s clubs. The social, educational and cultural impact of women moving into full citizenship and assuming mantels of leadership throughout the 19th and 20th centuries is also discussed. Visit http://www.texfwc.org for additional information.


Congratulations to Eleanor Brackenridge Literary Club for receiving State recognition for their efforts. For over 110 years this organization has existed to support scholastic achievement, citizenship and literature in the lives of the citizens of Jackson County and Texas.
Posted by LesC at 6:13 PM